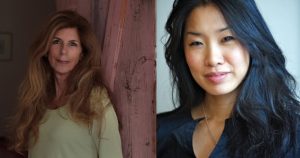 Marie Howe is the author of four volumes of poetry, Magdalene: Poems; The Kingdom of Ordinary Time; The Good Thief; and What the Living Do, and she is the co-editor of a book of essays, In the Company of My Solitude: American Writing from the AIDS Pandemic. Her poems have appeared in The New Yorker, The Atlantic, Poetry, Agni, Ploughshares, Harvard Review, and The Partisan Review, among others. She has been a fellow at the Bunting Institute at Radcliffe College and a recipient of NEA and Guggenheim fellowships, and Stanley Kunitz selected Howe for a Lavan Younger Poets Prize from the American Academy of Poets. In 2015, she received the Academy of American Poets Poetry Fellowship which recognizes distinguished poetic achievement. From 2012-2014, she served as the Poet Laureate of New York State.

Tina Chang was raised in New York City. She is the first female to be named Poet Laureate of Brooklyn and is the author of the collections of poetry Of Gods & Strangers (2011) and Half-Lit Houses (2004). She is also the co-editor of the W.W. Norton anthology Language for a New Century: Contemporary Poetry from the Middle East, Asia, and Beyond (2008). She is the recipient of awards from the New York Foundation for the Arts, Academy of American Poets, Poets & Writers, the Ludwig Vogelstein Foundation, and the Van Lier Foundation among others. She teaches poetry at Sarah Lawrence College and she is also a member of the international writing faculty at the City University of Hong Kong.